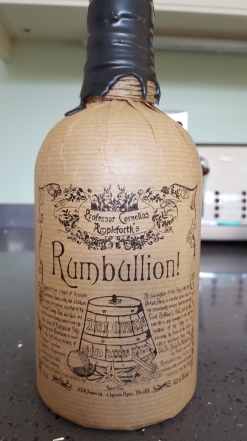 What is it? A spiced rum made by “Ableforth’s”, which is basically the MasterOfMalt guys who produce a range of drinks under the parent company Atom Supplies. They state that this is a rum base of high proof Caribbean rum infused with various spices to produce a spiced rum. Various ingredients are used but mainly vanilla, orange zest, coriander, cinnamon, cloves and cardamom. There are no details on the rum base and one would imagine that it changes from time to time depending on what’s available – I can’t detect anything about the base rum due to the levels of spicing.

Nose: Yikes. This is big and intense stuff. Massively spiced. Very Christmas’y with plenty of flambéed orange, definite coriander and a bucket load of cardamom; they say “a hint” of cardamom – I say it’s been put in with a shovel. There are some aniseed notes in here too and a bit of grated ginger, along with that clove and some fresh ground black peppercorns. Basically, it does what it says on the tin; very little rum and very much spice.

Palate: Thick, viscous, actually quite cloying which isn’t a good thing. There is less sugar in this than in a bottle of El Dorado but it feels like way more – it’s very, very sweet. Flavour wise it’s pretty much a rinse and repeat of the nose but not as nice; the nose was Chirstmas’y, festive and inviting whereas the palate is like some form of cough syrup and cola concoction, way too sweet and way too spicy and neither of the 2 really blend. Not really much more to say on this…

Finish: Long (the sugar sticks the rum to your mouth, long). Yep; it’s the same as the nose and the palate. Loads of flavour but as complex as a cardboard box.

Thoughts: Ok look; I’m not being critical of this as a beverage, I’m really not. I see what they’ve tried to do here but as a rum it’s not very good at all, there is nothing remotely “rum” about it – in fact you could make the same thing with any neutral spirit and those spices – this isn’t really a rum, despite it’s name (spiced or not). This is a liqueur.  Now as a liqueur (or general beverage) it’s quite good; there is plenty of flavour and it’s interesting, in mulled wine or a winter cocktail this would be a cracker. The problem here is that it’s retailing for around £35 a bottle, which is sipping rum territory and it’s not in the same ballpark when you sip this neat. If I had £35 to spend on a bottle of spiced rum this week I’d be buying a bottle of Bristol Black, simple as that.

I must note; if you’re after a sweet and spicy Christmas tipple and you’re not too bothered about mixing it or exploring complexity then this may well be right up your street but for me it’s just not what I’m looking for really and not something I’ll buy again.