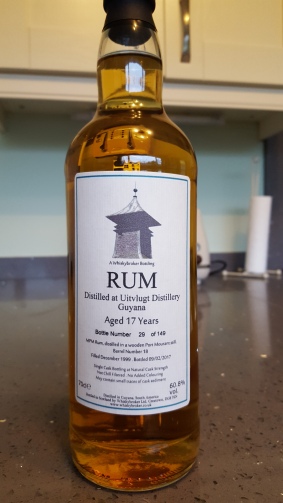 What is it? A single cask rum from Guyana, distilled from molasses at the Uitvlugt Distillery on the double wooden pot still of Port Mourant – as I’ve already covered a few times, the various stills which are now resident at the Diamond Distillery have moved to various other distilleries over time and so is the case with the Port Mourant still; it was at Uitvlugt during the time this rum was distilled and moved on to Diamond in 2000. So, it’s an “Uitvlugt” but it’s actually a Port Mourant.

This rum was distilled and filled into barrel 18 in December 1999 where it aged for 17 years until it was bottled on 9th February 2017. From what I can tell from the tasting this was matured in Europe and not the tropics.

My bottle is number 29 of 149 – this seems like a low number of bottles from what appears to be an ex-bourbon cask, however there is a bottling of Rabbies Rum by TheWhiskyBarrel that is exactly the same barrel number, fill and bottle date as well as abv so it looks like the cask was split between TWB and WhiskyBroker.

Not coloured, not filtered and bottled at full proof of 60.8% abv.

I’ve been drinking this with water at about 55-57% abv so the review is based on that.

Nose: Aniseed, light liquorice, fennel, olive oil, white spirit – the expected start really. On to WD40, old tyres, plaster, concrete dust, soil and some candle wax; it’s a dirty old rum this one, lacking fruit and freshness but sometimes dirty is good….There is some thinned out toffee and maybe a hint of golden syrup, a spiced honey which is almost like a honey glazed ham. Very Islay whisky in style. Deeper down there are some smoky pipe notes/barrel char and some sourness or bitterness which reminds me of sour cherry stones.

Palate: Medium mouth feel. Tarry, rubbery, engine oil, the licked back of a stamp, sticking plasters (BandAids for our American friends) – very phenolic at first. Hello, some fruit! Sourness at the start with lemons but then it sweetens a little, olive oil again, limes maybe, a touch of dried apricot and a good handful if salt and pepper crumb you get on fish.

Finish: Long, Ah, there is almost a chilli kick and then cooling feeling with cherry stones and chalky tablets as it moves from the palate to the finish; very similar to a Talisker single malt whisky actually, uncannily so. As it leaves there are some green bananas, limes, a little aniseed and a touch of runny honey.

Thoughts? Off balance and totally clearly a single cask. This rum lacks any real fruit and freshness, and it’s not a typical Port Mourant, however it’s certainly not a “bad” rum. This is an MPM cask, so it was always going to be of a different style and should not be compared to a “bigger” Port Mourant; it’s very mineral, phenolic and spirit forward which is just the kind of spirit I like. It reminds me a lot of my whisky drinking past, but it’s not going to be right for every rum drinker out there, you’ve got to know what you like and know you like this type of rum to “get” this.

A nice change up and one I’m very glad I picked up for the £55 it cost me – damn good value for money if you ask me. Well done once more Whisky Broker.