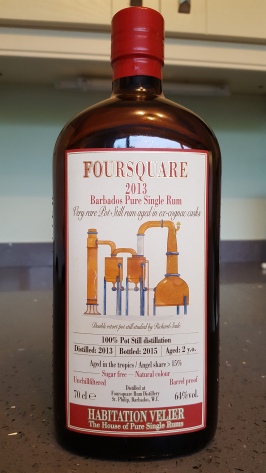 What is it? Pure single rum from Barbados, distilled at the Foursquare distillery on a double retort pot still in 2013, aged for 2 years in ex-cognac casks, and bottled in 2015. This rum is 100% tropically aged and that 2 years has produced an Angel’s Share of over 15%, so a loss of around 7-8% a year! To put this in context, European aged spirits tend to loose around 2% a year to the Angels, so this is interacting and oxidising at around 4 times as quickly as something you’d get maturing in the UK. 2 years doesn’t sound a lot but with the rapid maturation taken into account this is equivalent to a European aged spirit of around 8 years old. Those 2 years have also been in ex-cognac casks which means it’s tight grained French oak, this is much more intense than ex-bourbon American oak and will add a lot of flavour to the rum.

Unchillfiltered, not coloured and bottled at 64% abv. Rock on.

Sugar? No. Zero additives to this.

Nose: Oh my, lovely. Certainly Foursquare at first, no doubt about that. As we begin it’s kinda what I’d expect with vanilla pod, spiced caramel sauce, those toffee pennies from a tin of Quality Street (mixed chocolates that you get in the UK at Christmas) and a little orange cake. Once my nasal hairs have got used to the heat (even at 57%!) there is more depth to this; it’s pretty fat, oily and phenolic with olives, raw licorice, raw coffee beans, raw walnuts, engine oil, grease…whatever, it smells dirty in a good way, like I’ve just come in from the garage. The phenolic and sweet smells blend to give an almost Umami effect which lights up your nostrils. This is a big rum and I could smell it all day long.

Palate: Perfect weight, oily but not viscous. Hot delivery, even diluted down – let’s be honest, it’s only 2 years old and has been in French Oak. Chilli infused caramel, pepper infused toffee, that vanilla pod again and then, as with the nose, BAM! Phenolic, meaty, oily, salty, brine, tapenade paste, candle wax, licorice, maybe a little tar or rubber – can’t quite put my finger on it. That salt-sweet Umami efftect again that just ignites your taste buds. Finally, just as things move towards the finish there is a little raisin and some dark chocolate creeping in.

Finish: Long, very long and hot. I was expecting a shorter finish given the age. The raisin and dark chocolate continue but it’s joined by licorice again, some cranberry, salty lime lift and a drizzle of thick honey over toast. The dark chocolate returns and it tails off with a coffee bean or 2.

Thoughts? A big, big rum. For a young rum it’s got massive flavour and incredible complexity right through from nose to the end of the finish. Ok, it isn’t very well balanced, which is something that Foursquare always is when it’s blended out, but geez come on, it’s a 2 year old French oak matured pot still rum at 64% – it was never designed to be balanced! What it was designed to do was show you what Foursquare pot still is like and celebrate that. With that considered it works perfectly.

£85….2 year old, that’s a lot. Would I buy this again? 100%. Age is a good marker of market value for spirits, generally, but there are other things to consider and this is about flavour in the bottle and it’s worth every penny.

*Buyer beware; this is not a rum for novices or the faint hearted*