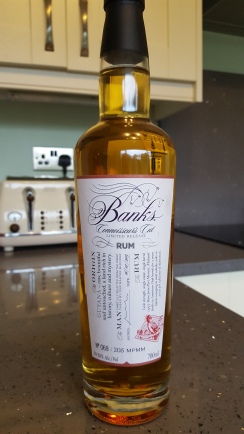 What is it? Guyanese rum from the Port Mourant Estate, distilled from molasses in the double wooden pot still – so Pure Single Rum. The cask marque is MPMM, which I don’t have too much information on, other than there are many Indie bottlings of Port Mourant marked “MPM” and I believe this means “Main Port Mourant”. This rum was distilled in 1997 where it was matured in ex-bourbon casks for 2 years before being moved over to ex-Malt Whisky casks in 2000. The bottling was done in July 2013 – which makes this rum 15 or 16 years old (depending on the exact distillation and bottling dates). It was part of an outrun of 205 bottles released and going off the taste profile and colour, aged in Europe somewhere (purely speculation on my part).

Natural colour, no chill filtering and bottled at cask strength of 59.58% abv.

For the record, I’ve taken this down to about 55% abv as that is the strength I’ve been drinking it at consistently. Nearly 60% abv makes it too narrow and tight, so the flavours just aren’t giving themselves up enough.

Nose: Aniseed, fennel seeds, black olives in brine, capers, shells and rock pools. A handful of dried anchovies and some distant tar. Very savoury and herbal that’s for sure! There is some dried banana and pineapple but drizzled in some type of liquorice sauce, a little sharp gooseberry and mango that has gone off and is fizzy sour. At the back there is a little warm oak, but faint and distant, runny honey and a malty flat beer like note. A scattering of almonds finish it off.

Palate: Full, intense mouth, oily. We’re right back with the nose here; anchovies, capers, seawater. salty olive, olive oil and fresh liquorice root. There is that tarry, oily, WD40 note in here, some faint sweet tobacco smoke and a burst of citrus fruit, but savoury like a smoked and salted box of lemons and limes. Slightly sour too with those gooseberries. There is some cask sweetness here towards the end with thin caramel, honey and a touch of cinnamon.

Thoughts? Excellent. It’s got some powerful fresh and raw Port Mourant notes to it but you can tell it’s a lot more complex, it’s see time in oak even though the cask isn’t very evident, it tames the spirit. It’s a very intense rum and for £100 it was very pricey at the time I bought this, however, looking at what Independent full proof aged Port Mourants go for now, it seems about right….

I can’t decide if i like this better than the Cognac cask. It’s sweeter. My first thoughts were “it’s better” but with time I’m not sure. The oak/cask on the Cognac cask seemed to have more effect on the rum, which I think is what it needs.

Would I buy this again? Probably. Is it a rum for everyone? No. It’s very focused in what is presents and isn’t for your casual drinker.