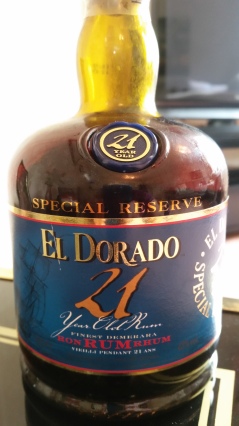 Ok, so it’s about time I got around to this, having done the 12yo and the 15yo, given that this is the “daddy” if you will. Another one of those rums that seems to pick up zillions of “awards” by “experts”. I’m pretty sure I know what I’m about to get with this one as I’ve read many a review on this myself. Here we go.

What is it? Guyanese rum blended from 3 stills that are now operated by DDL (Demerara Distillers Limited); the dominant component being from the Albion Still (four-column Savalle still). The other 2 stills included in the blend are from the Enmore Still (wooden Coffey still) and the Versailles Still (single wood pot still). At least 21 years old. Molasses based.

Sugar? Yep. Of course. It’s an El Dorado. Online sugar test data shows anywhere between 16 grams/litre and 33 grams/litre, so we’ll go in the middle and call it “some”. It appears to have less than both the 12 and the 15 year old, which can only be a good thing. There also seems to be some variation by batch.

Nose: Lots of oak and your typical Demerara straight away with liquorice, aniseed and a little bit of tar. The brown sugar you use to make cakes with, infact….yes, overcooked and slightly caught fruit cake. Molasses, blackberry jam, prunes, bananas, black coffee and a little bit of smoke. There are some woody spices in there too, your typical cinnamon and clove while a slight mentholly note picks things up a bit. Pretty complex actually and a fair bit lighter (well, less “heavy”) than the 15 year old. Oh, a nice bit of worn leather pops up after a while too. There is a good bit of age on the nose.

Palate: Sweet delivery and semi-viscous mouth feel. Not as bad as I was expecting given I know this is loaded with sugar. Herbal, minty, banana liqueur, prunes, figs, dates, maybe a hint of orange/marmalade. Lighter liquorice, slightly bitter coffee, actually there is a fair amount of bitterness given the sugar levels (too much cask?), black cherry jam and a touch of earthy mushroom. Pretty complex despite the meddling.

Finish: Medium to long, quite sappy and actually bitters off with some strong oak. Touches of leather, cigar smoke and a burst of bitter orange marmalade, some black coffee and a handful of fresh herbs. Ends with that fuzzy buzz you get with altered rum and the lingering taste is a confusing mix of sweet and bitter that’s not entirely pleasant nor is it unpleasant.

Thoughts? It’s a pretty good rum. I don’t taste rum blind because I drink what I’ve bought and I know what I’ve poured into my glass, and this can cause a problem. The problem is expectation. I expect this to be very good, it’s quite expensive (£80) and it’s won loads of awards, but at the same time I know it’s loaded with added sugar which I generally don’t enjoy as a rule. So what do I do? I’m judging this before I’ve even tried it and I’m not any wiser after having tried it. I don’t think it’s one of the best rums in the world, even if I was a sugar fiend there are “better” ones out there. Sure, it’s more complex than the 15 year old, it’s got less sugar and that’s good, but personally I’d take the 15 year old over this (or buy 2 bottles for the same price). In my view it’s not twice as good and the Port Mourant still in the 15 gives it the oomph it needs.

You can pick this up from The Whisky Exchange here: